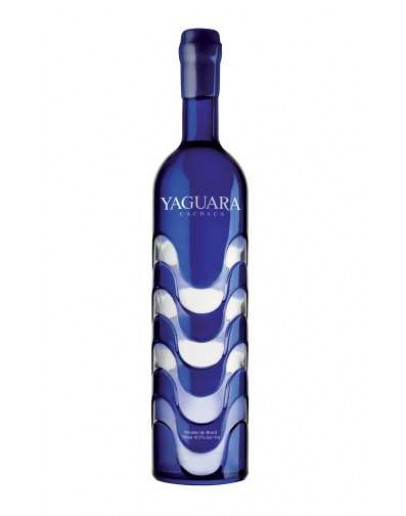 DESCRIPTION: Yaguara is the first organic cachaça pot still to be already become fashionable in the most famous cocktail bar from Sao Paulo to San Francisco and now arrives in Italy. Designed in the family farm in Parana, cachaça is thoroughly mixed by the master blender Erwin Weimann, adept at combining traditional craftsmanship and the most advanced skills. His striking image is characterized by the bottle designed by Brian Clarke, one of the most famous glass artists in the world, and is inspired by the waterfront of Copacabana. Yaguara intends to let the world know the artisanal cachaça, representing a perfect mix of rural authenticity and a modern spirit and intriguing. Yaguara is produced with sugar cane variety of Java, totally certified organic collection in the period from June to December as Parana is located in the southern hemisphere. The production process is sustainable. The juice is diluted to 16% Brix index and introduced into the fermentation tanks of 1,500 liters and are added yeasts. The yeasts used are 3 or 4 of the same strains that are located on the barrel, and are brought into the laboratory to be multiplied, so as to maintain and enhance the terroir specific and avoid contamination. The process lasts between 14 and 18 hours at about 23 ° / 25 ° C until the alcohol content of 12% alc. 0 with sugar. The distillation process begins with the vinho in the heat exchanger for a pre-heating to 70 ° C, after which copper is introduced in the still of 750 Liters, steam powered at a distance to have a gradual heating. Erwin Weimann oversees the entire process. After distillation, the white Cachaça is at least eight months in stainless steel tanks, and here is gradually diluted from 48.5% to 41% with water artesian well 300 meters below ground. A small portion is placed in wooden barrels for Carvalho 5/6 years to create the reserve of the family Meneghel. The two are then mixed to create cachaça Yaguara. The subsequent filtration is made with triple process, carbon, cellulose and to subzero in a tank from 5000 liters.